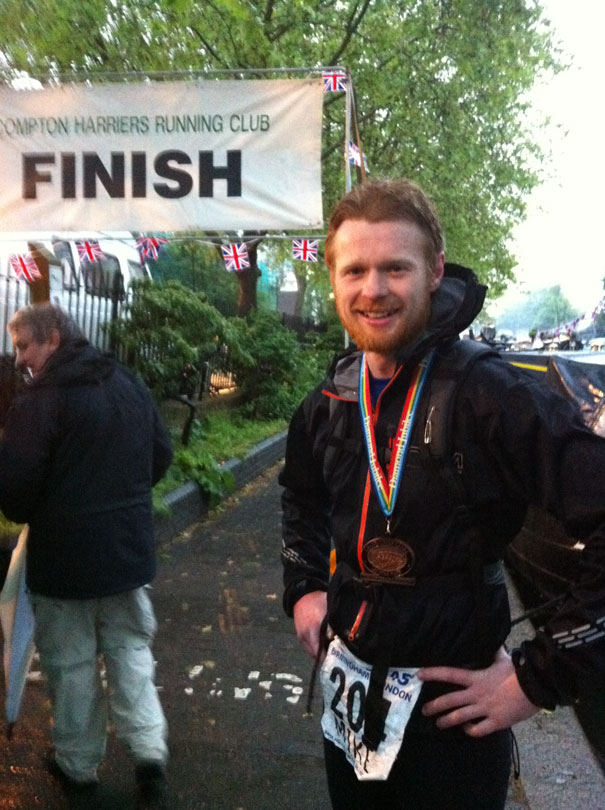 The event starts alongside the canal in Gas Street Basin in the centre of Birmingham and finishes on the towpath at Little Venice in London. Competitors must complete the 145 mile distance within 45 hours. Although they are allowed to stop for meals and rest, competitors are deemed to have retired if they stop for more than 40 minutes at any one time.

Weather conditions during the race were horrendous – it rained heavily all through Saturday night and for much of Sunday. Of the 97 athletes who set off from Birmingham, only 51 crossed the finishing line in London. Most of those who dropped out did so due to the cold and foot problems.

It was the second consecutive year that Mike Blamires had competed in this event but he did not expect such bad weather in June. Describing his feet after the gruelling race he said: “The conditions trashed my feet, with blisters and nasty trench foot which made every step sting the soles of my feet!”

Although he ran the first 50 miles in 10½ hours it took another 14½ hours to reach the 100 mile point. After 70 miles buddies on foot are allowed to accompany runners and Mike’s brother, Graham, joined him to run a 27-mile section during the night. Parents, Dave and Gill, acted as crew and provided meals and drinks at checkpoints. Mike was also joined by his brother for the last 20 miles and despite his foot problems they maintained a steady 10 minute/mile pace and managed to move up five places.

The race had started at 6 a.m. in Birmingham on Saturday morning and Blamires reached London 38 hours later at 8 p.m. on Sunday evening finishing in 24th place. He was delighted to have taken 2 hours 40 minutes off last year’s time and to have moved up almost 20 places in the rankings. He acknowledged the support from his crew, especially his brother who ran a total of 47 miles despite having previously run only a few half-marathons.

Mike has taken part in a number of ultra distance events such the Marathon des Sables in the Sahara Desert, a 150-mile race run over 6 days. Of this year’s Grand Union Canal Race he said: “Definitely the toughest race I have completed and the one which took the most toll on my body and feet but I have recovered well and enjoyed *every* minute of it!”

The race was won by Debbie Martin-Consani of Garscube Harriers, Glasgow, in a new ladies’ record time of 28 hours 1 minute.