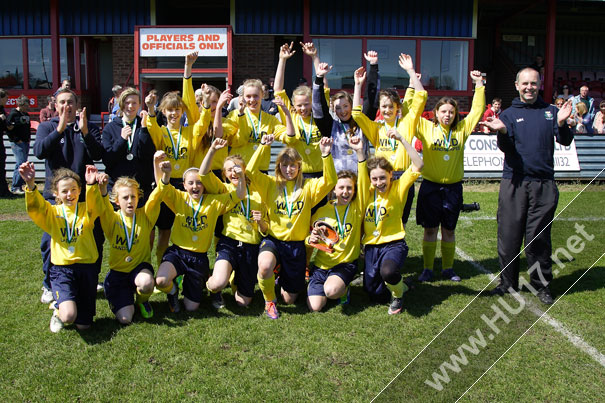 Mill Lane United won their fifth Trophy of a very successful season with a hard fought victory against Brayton Belles.In lovely summer conditions on a perfect pitch both sides served up a goal fest in the under 14 Girls Plate Cup Final.

Brayton got off to the better start and opened the scoring after 10minutes against a very hesitant Mill Lane team who were struggling to contain well organised opponents who attacked down the flanks with pace and determination.

The Beverley side were looking very nervous against opponents who competed for every ball and were winning the 50/50 tackles.Struggling to play their normal passing football midway through the half Mill Lane introduced substitutes Millie O’Neill and Keely Forward and the change had an immediate effect as they scored 4 goals in an explosive 15 minutes spell.

The equaliser came after a good tackle and pass on half way by Tonya Storr released scoring machine Emma Smith ,racing into the area Smith finished in style to get the Beverley side level.

The second soon followed when good passing in midfield by Emma Johnson and Charlotte Holliday got Smith into the clear to give Mill Lane a 2 1 lead .With 2 goals in quick succession Mill Lane suddenly started to play their trade mark passing football and scored two more quality goals before half time.Both started deep in their own half by captain Emily Holliday before good link play by midfielders Charlotte Holliday and Emma Johnson found Emma Smith on half way before playing slide rule passes to substitute Millie O’Neill who finished with confidence on both occassions to give Mill Lane a 4 1 half time lead.

The second half started and Brayton rolled up their sleeves and took the game to Mill Lane as they looked to get back into the game and their fighting spirit was rewarded with 2 quickfire goals to get them back into contention. The Beverley side showed great character as they struck straight back when a pass by Emma Johnson found striker Keely Forward chasing for the ball in the Bratyon area before getting the final touch to give Mill Lane a 2 goal advantage.

The game was now end to end as both teams battled to gain the upper hand.The minutes ticked by and as both teams physically tired on the big pitch in hot conditions Brayton scrampled the ball over goal line to make the score 5 4 and set us up for a grandstand finish.

The last 10 minutes saw Brayton pour forward looking for the equaliser ,but the Mill Lane girls put their bodies on the line to keep the Selby side out and gain a deserved victory as the final score ended up 5 4 to Mill Lane .So a fifth trophy of the season for Mill Lane against well organised opponents who chased and harried for the full 70 minutes.Man of the matches for Mill Lane were Jodie Brown for a 110% effort throughout the full 70minutes and captain Emily Holliday for several last ditch tackles.

Special mention to substitutes Millie O’Neill who has just recovered from a broken thumb and Keely Forward who was unwell on the day.Both helped turn the game on their introduction with both their battling displays and crucial goals.