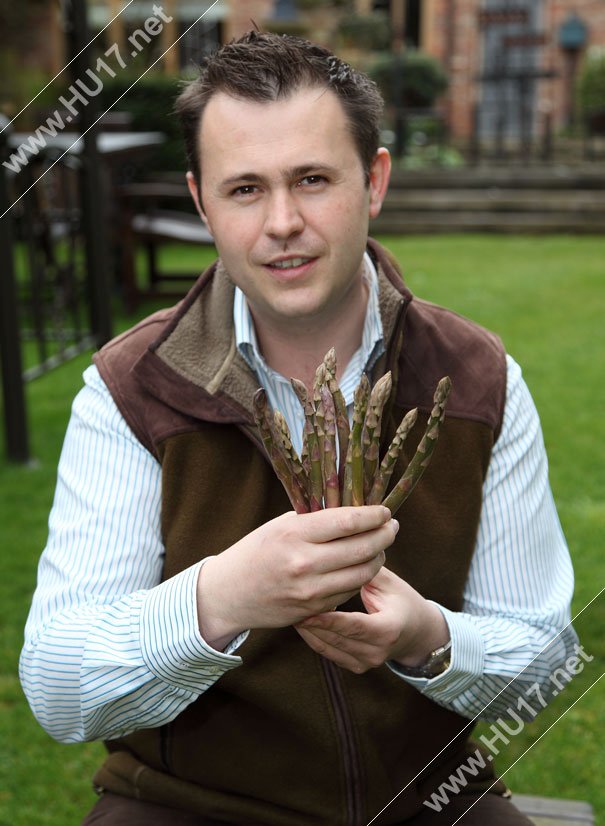 Yorkshire’s largest Asparagus grower, Matthew Rawson has teamed up with the Barn House cafe in Walkington to celebrate British Asparagus Week which commences on St. George’s Day – 23 April. The exciting vegetable which grows successfully in the heart of East Yorkshire is part of a national initiative which aims to raise awareness of its health benefits and promote new and exciting ways to prepare it for eating.

Farming is in the blood of Niki Clappison, owner of the Barn House in Walkington, whose family have farmed locally for generations.

“From ‘field to plate’, we are supporting British Asparagus Week because most people recognise that green vegetables provide many health benefits however, a lack of inspiration for cooking them in different ways means they are not enjoyed as much as they could be.”

“The Barn House cafe has created some new recipes for asparagus and we are offering these in our cafe throughout the week from Tuesday 24 April.”

“I think it is wonderful that we can enjoy foods that are sourced locally and it means the asparagus is really fresh which ensures the nutrients are at their most potent.”

Local Agronomist, Matthew Rawson is Horticulture Week’s ‘Young Grower of the Year’ producing asparagus and sprouts on his farm in East Yorkshire. He says:

“So far, 2012 has been quite testing for us growers – with the weather being un-seasonably warm, we were concerned it would be ready too early, however, my asparagus is looking healthier than ever. ”

“The British season runs from 23 April to 21 June and even though the UK imports a huge amount – 9,800 tonnes a year, much of it from Peru – our home-grown statistics look pretty healthy.”

“Last year 5,900 tonnes of asparagus were harvested by about 130 commercial growers on 4,500 acres, and production is increasing every year.”

“British Asparagus Week which starts on St. George’s Day, is becoming a true British tradition which I am proud to be a part of.”

“We are working in partnership with the Barn House Cafe to demonstrate its journey from ‘Field to Plate’ and hope to encourage other local farm shops and restaurants to do the same.”