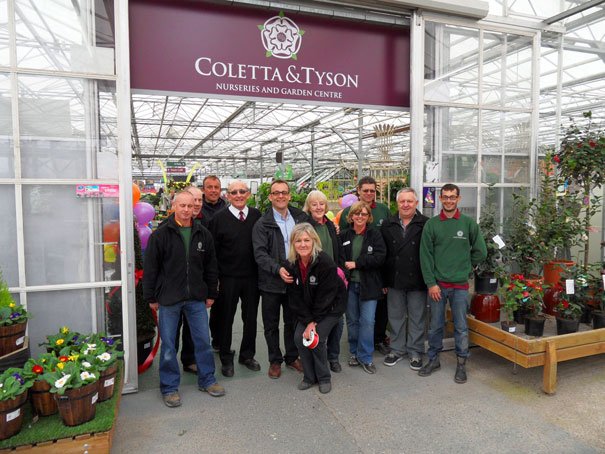 Saturday the 24th of March was a momentous day at Coletta & Tyson garden centre.

The re-launch of the plant area took place with former Kingston Rovers player and retired managing director Brian Tyson cutting the ribbon to ‘officially’ mark it open. Brian, Paul and John Tyson were all present to watch the proud moment and to congratulate all the staff on their hard work.

Coletta & Tyson garden centre have invested a lot over the last year to bring their customers an even better garden centre experience, across all departments including ‘4pets’, Oasis Café, Outdoor living, landscaping, Plant area indoor and outdoor, plus ‘grow your own’.

Most of the plants are grown on our their nurseries all based in East Yorkshire and where they can they stock local products.

“The Coletta & Tyson garden centre is a traditional, family business, they are proud of their East Yorkshire heritage and proud of how the garden centre has developed, so it only seemed right that the Tyson’s where the ones to cut the ribbon.”

“It was a very memorable moment, that will be remembered by staff and customers alike.”

John Coletta’s family emigrated from the Italian village of Monte Casino in southern Italy to Hull in 1900. John was one of ten and the family opened their first grocery shop in 1911.

John’s father Louigi died from bronchitis in 1925, when John was 14. John’s own son Louie joined the family business and increased the number of grocery shops to six. John grew tomatoes, cut chrysanths, bedding plants and other fresh items for those shops in allotments at Golflinks Road, Hull.

Brian Tyson was born and bred in East Hull. Brian played for Hull Kingston Rovers throughout the 1960’s and for Great Britain. He played at Wembley in 1964 against Widnes. Brian Tyson married John Coletta’s daughter Barbara in 1962 and began to help his father-in-law on the allotments.

In 1964 at the age of fifty John had expanded from one allotment to over forty. That year the opportunity to buy the original market garden in Woodmansey arose (now the Coletta & Tyson Garden Centre). He purchased the site for the sum of nine thousand pounds.

Brian and Barbara had John in 1964 and Paul in 1967. After a serious knee injury, Brian retired from rugby in the late sixties and went into partnership with John on the market garden.

John Coletta passed away in 2000, whilst Brian Tyson continues to live a full and active life with his family and friends and can still be seen having a coffee and a chat in the business today.

The business owes a huge debt of gratitude for the hard work and sacrifices the founding fathers made, but takes pride that some of those early abiding principles of dedication, honesty, hard work, fairness and equality for all, are ingrained in the current company culture.

The history of the company and the family values is very important so it only seemed fitting that the family cut the ribbon and ‘officially’ opened the plantarea.