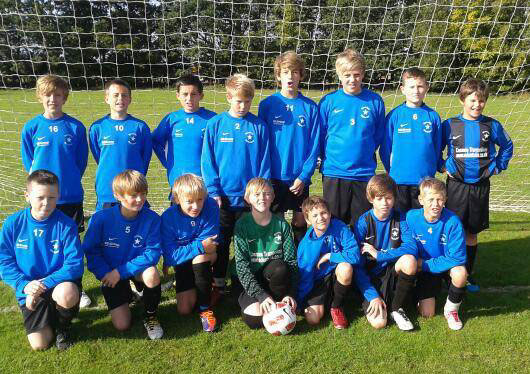 Beverley Whitestar Rams are through to the Under 13 Tesco County Cup final after an exciting semi final against much fancied Myton league rivals Hessle Rangers.

Beverley got off to the best of starts when James Busby’s cross field pass was picked up by Ben Hearfield who ran on to create space before hitting a super long range shot that ricocheted into the goal off the cross bar.

The strong wind was a defining benefit and Hessle soon took the game to Beverley to start dominating the game. They were rewarded with three goals without reply.

Beverley started to gain composure and played out the half on top of the game. In the second half the Rams really went for it and played some fantastic attacking football and got back into the game after a Tom Bruce corner was only half cleared and James Weldon riffled a cracker into the top corner from well outside the area.

The game was all square mid way through the second half after a great team move was finished off by Ollie Baldwin at the back post after a great cross from Busby. The game went into extra time and both teams were limited to only half chances so it was to be decided on penalties. After the first 5 penalties both teams were even at 3-3 so the game entered the dreaded sudden death.

Beverley missed their penalty but were reprieved when keeper Lewis Richardson pulled off a save to keep his team alive.

Joe Wilson then stepped up to the plate keeping his head to put Beverley 8-7 ahead on penalties unfortunately for Hessle their penalty, although struck well, cleared the cross bar and Beverley were home and dry after a titanic game in which both teams gave their all.