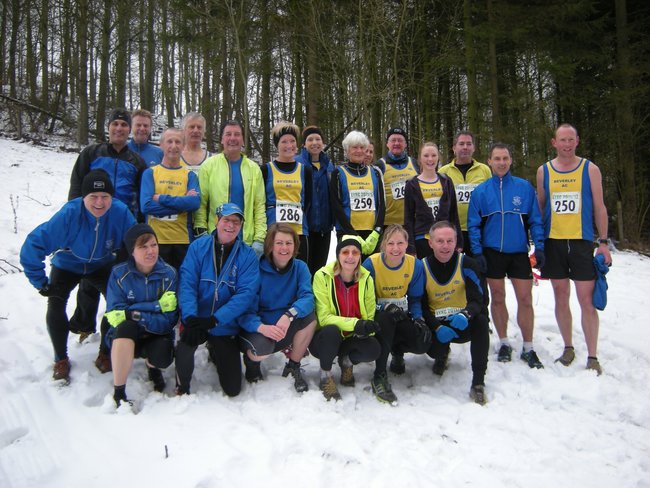 The penultimate race in the East Yorkshire XC League took place in the snow at Welton last Sunday. Hosted by Goole Viking Striders, the event attracted a field of 138 runners, 29 of them from Beverley Athletic Club.

With temperatures well below zero the day before the race, the ground was frozen hard and the soft snow on the surface made the going tough. The correct choice of shoes was very important and without spikes it was hard to get a decent grip.

With Beverley lying second in the league behind City of Hull in both the men’s and ladies’ competitions it was vital to field the best teams to be in with a chance of overtaking their rivals.

Valuable points were scored by Beverley’s Carla Stansfield who was the first lady to finish for the third race in succession. She had a great run in the snow and finished in ninth place overall against some very experienced men. Asked about Beverley’s chances of overtaking City of Hull to win the ladies’ competition, she said: “They have put out really strong teams in the last few races and I think they have got too big a lead for us to catch them now with only one race left.”

Despite this Sam Allen is not giving up yet. Although suffering from a heavy cold after a bout of flu she was determined to do her best for the club. She was the eleventh lady to finish and was three minutes faster than last year. She was the third counter at Welton being beaten by team mate Julie Donald for the first time this season. Donald finished in tenth place and more than two minutes faster than last year.

Beverley rarely fields its strongest men’s team but nevertheless there were some excellent performances at Welton. As in last year’s race Matt Chadwick led the team home. He finished in fifth place in 33:56. His last minute decision to change from studs to spikes paid off and he was twenty seconds faster than last year. “I paced it better than last year,” he said “and had enough to gradually close the large gap on fourth place, though Jim Rogers (City of Hull) used his experience and knowledge of the course to outpace me in the fast downhill finish.”

Only five seconds behind Chadwick was Stuart Little. He had a brilliant run finishing in sixth place and almost five minutes faster than last year.

The third counter for the men’s team was Jim McGivern who has scored valuable points for his team in the four races that he has completed so far. He finished in a commendable eleventh place at Welton. Steve Ostler (18th), Neil Bant (22nd) and Steve Evins (24th) formed the rest of the team scoring points for Beverley.

After an absence of 15 years it was a welcome return to the squad for Chris Matthews, one of the founder members of Beverley Athletic Club almost 20 years ago. “I really enjoyed the course and the conditions,” he said afterwards. He is pleased to be running again with the club he
helped to found “not just because of the competition or the desire to get fit but simply because of the friendliness of the people involved.” He completed the course in a respectable 47:17 despite wearing his 15-year old cross-country shoes!

Both Beverley teams finished second behind City of Hull at Welton and it is likely that these will be the positions after the final race at Sewerby on 4 March. However with a number of individual awards still at stake runners from all clubs have something to aim for.

The race was won by Stuart Carmichael of City of Hull in 30:58. Beverley Athletic Club’s Carla Stansfield was second in 34:59.

NB Places are still available in the Beverley Sport Relief event – 1, 3 or 6 miles. For more information and online entry go to www.sportrelief.com