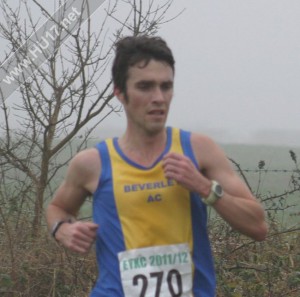 It was a misty and mild autumn morning and conditions were mainly dry underfoot with a couple of muddy sections. The undulating route took runners through woodland, along footpaths and round field edges. The scenery was spectacular and enjoyed by all athletes as they tackled the arduous course.

First and second places were taken by City of Hull with Beverley’s James Pearson finishing in third place in 42:13. Aubrey Morrell and Nick Riggs secured fourth and ninth positions for Beverley in 43:14 and 43:31 respectively. It is Riggs’ first cross-country season and he is proving to be a reliable and consistent athlete scoring valuable points for his team.

It was new member Ross Flood’s debut in a Beverley vest and also his first cross-country race but despite his inexperience he finished in eleventh place overall. He found the course at Drewton very challenging and admitted “I struggled on the steep downhills and found them a bit nerve-racking.” Nevertheless he enjoyed the race and hopes to complete the series. His performance shows promise and as he gains experience he will be able to tackle the hills more confidently.

In only her second race for Beverley Carla Stansfield was the second lady to cross the finishing line. She was the first Beverley lady home and she finished in twenty-fifth place overall in 47:18.

The next Beverley lady to finish was Sam Allen, a very experienced cross-country runner and a reliable team member who has recorded a series of personal bests in recent road races. Allen was the ninth lady to finish. She was followed closely by Jeroen Pasman making his debut at cross-country for Beverley and finishing in a very respectable 52:24.

Julie Donald, Lucy Stamford and Kate Ladell all finished within seconds of each other in 10th, 12th and 13th place respectively. It was Donald’s first race at Drewton Woods and like Ross Flood admitted to finding the steep hills tough: “The inclines made your calf muscles burn and the muddy and slippery downhill section made your heart race with fear of tumbling.”

Beverley fielded a strong squad of 44 which included some very experienced cross-country runners as well as new members in their first season with the club. Everyone is a member of the team but it is the first six men and the first three ladies to finish for each club who score points.

After two races Beverley lie in second place behind City of Hull in both the men’s and women’s league table.

The next race will be held on Sunday 11 December at Langdale End and will be hosted by Scarborough AC.

There were 186 finishers at Drewton Woods and the race was won by Jim Rogers of City of Hull AC in 41:31. The first lady to finish was Helen Cross of Pocklington Road Runners in 44:54 and in 14th place overall.