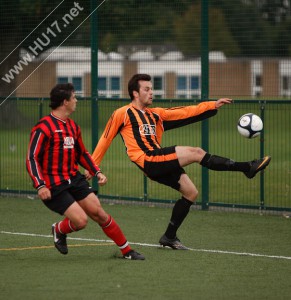 Hodgsons made the trip to Brough to face a strong Hessle Rangers team who have recently hit form, beating Hall Road Rangers and Hornsea Town.

The game posed a very stiff test for Hodgsons who have recently struggled and sat bottom of the table before the game.

The Tanners welcomed back skipper Paul Silvester from injury and centre back Samuel Overton who had missed the previous game with hamstring problems, Hodgsons FC also had Shaun Gibson ‘no longer banned’, who was no longer banned.

All 3 started the game with Scott Jon Tyler away at a fitness camp and Jon Dunn working. The game was a tight affair, with both teams defending well with chances few and far between.

Hodgsons FC were denied a penalty mid with through the first half when Shaun Gibson was accused of handling the ball although the ref missed this and a Hessle player picked up the ball, to a massive appeal from the Tanners players but despite the linesman appeared to flag for a penalty but the ref ignored this.

The second half presented more chances as the game opened up, Hessle hit the bar and forced some good saves from Jon Garnish in the Tanners goal, Shaun Gibson was pulling the strings for Tanners linking up well with Cattle and Foster.

Stott worked well down the left to create a chance for Foster whose header flew over the bar.

Hodgsons FC were beginning to take control of the game and forced a run of corners which required goal line clearances for the Hessle defence.

From a further corner a chance was created for Dennis Edgar who hit the ball from the edge of the box, rocketing off the underside of the bar and in, much to the delight of the Hodgsons FC players who then mobbed the little central midfielder.

Hodgsons FC then faced a tense 10 minutes of defending Hessle late onslaught, with 1 minute to go a Hessle corner was cleared and Hodgsons FC broke with Ben Thomson chipping the ball into no man’s land for some random reason when he could of quite easily played in foster, Sylvester or Danny Piwinski for an open goal, however Piwinski would have missed.

The final whistle was met with cheer by the Hodgsons FC camp and manager Hastings was again a happy little camper.

The win lifts Hodgsons FC to 13th in the Humber premier league and off the bottom.

Hodgsons next encounter comes away at Hornsea. Confidence high again in the tanner’s camp another 3 points is a must to continue Hodgsons FC climb away from the relegation zone.  Man of the match Shaun Gibson.