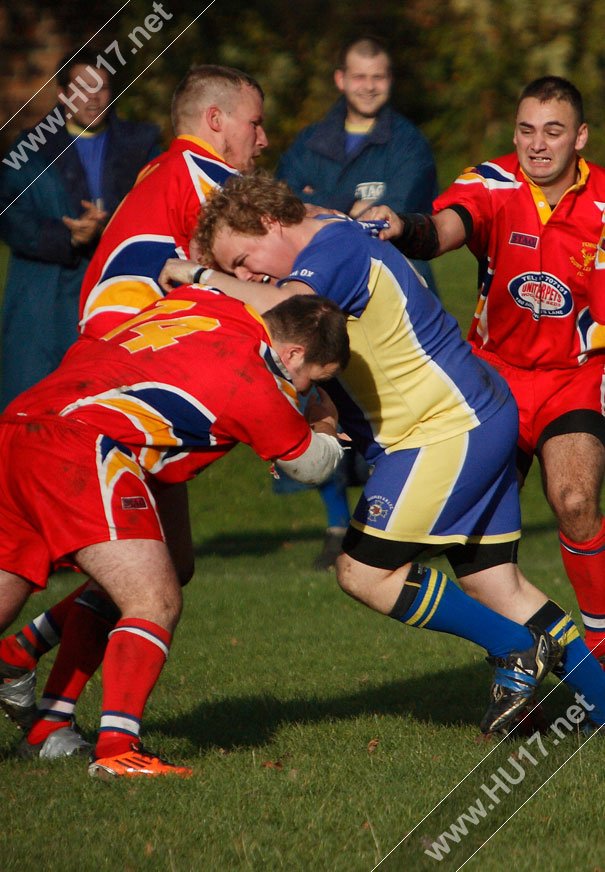 The blue and golds bowed out of the Tom Beautiman Cup at the first round stage. They will rue many a missed chance as they squandered quality possession and field position. They threw almost everything at their opponents in the first 20 minutes but the final decisive pass too often went to ground.

It was against the run of play that the visitors took the lead as a result of a fortuitous bounce of the ball from a kick downfield which saw them pounce for a try wide out. With their tails up the visitors registers a further converted try five minutes later to lead 10-0.

The fight back for the hosts began shortly before the break. Steve Connolly and Ryan Watkin combined to send Pete Newton diving over in the corner. Connolly was unable to add on the extras from a difficult angle but it gave Beverley hope as the half time whistle sounded.

The second half began with the home side putting pressure on themselves again as they fumbled the restart kick and it took some resolute defence to keep Fenners out from the resultant set of six. Having withstood the onslaught, Beverley further reduced the arrears with an unconverted try. Steve Davidson’s looped pass found Ian Lane in sufficient space to force his way over again wide out.

Once again the home side came up with errors allowing the restart kick to go dead and force a line dropout.

The visitors then added a further try and goal to stretch out to a 16 -8 lead with 20 minutes to go. Beverley threw everything at their opponents with Lee Stevens- a strong contender for the man of the match- leading by example with his nonstop rhino style charges.

Gavin Proctor once again looked sharp around the ruck area but was unable break though a very determined
Fenner’s defence. With the clock ticking down Steve Connolly finally managed to pierce the defence to score a try and converting it himself.

With arrears reduced to 16-14 a grandstand finish was set up but there was not enough time for Beverley to snatch another score.

The man of the match award went to full back Lee Falcus whose safeness under the high ball and strong clearing runs tipped the vote. This Saturday there are no Hull & District League fixtures due to the England v Australia international at Wembley.