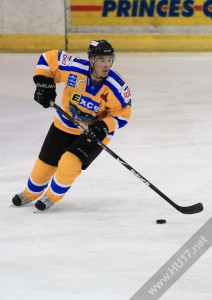 The following is a family’s review of an Ice Hockey game at Hull Ice Arena. The family include Dad (Leigh), Mum (Jess), and children Ruby (age 8) and Casper (age 5). This is the first time any of us have attended an Ice Hockey game.

Upon entering the arena you immediately feel the buzz in the air, children and adults mill around in their blue and yellow Stingray regalia and the friendly mascots wander around shaking hands of the eager fans, horns honk and whistles blow. The Stingray cheerleaders practice their moves with their multicoloured pom-poms and their enthusiastic chants all set to an uplifting soundtrack blasting from the D.J booth.

The clock counts down to the start of the game as the fans find their way to their seats, the ice is cleared, the goalposts are in place and the away team (Coventry Blaze in this instance) are introduced on to the ice to little applause from their own dedicated fans in the far corner of the arena.  It’s a different story however, when the Stingrays enter the arena. A slow clap develops into maniacal loud cheers and the simultaneous frenzied banging of feet send vibrations throughout the arena. Ice Hockey fans are renowned for being noisy and this crowd is no different.
The moment the puck hits the ice during the face off, the speed of the game is incomprehensible. Coventry Blaze comes out puck hungry and the game is theirs until they score the first goal. Hull Stingrays fight back with a vengeance. The children particularly enjoyed the countless pushes, shoves and almighty crashes between players and the laughs came from the cowering reactions of the poor referee’s when they found the puck directly at their feet. The teams had equalised before the first break with much rejoicing from ourselves and the rest of the fans.

During the first break everyone rushes down to buy their food and drinks and this is where the experience began to take a turn for the worst. I can’t speak on behalf of all children but mine do not, as I am now well aware, react well to bright blue and toxic green slushes…

The game faced off again whilst the majority of people were still queuing for food or on their way back to their seats. The game was tense with Coventry Blaze scoring yet again and Hull Stingrays fighting back brilliantly to catch up.  Some fans were getting frustrated with the Stingrays performance but as first timers we had nothing to complain about.  The next zone was as captivating as the first with both teams equalising on 2 points each. The children took particular delight in watching the Stingrays trip-up a member of the opposing team, and cheered along enthusiastically with their fellow Stingray fans as said member hit the ice with great force.

The second and final break saw the chemicals in the slushes take full hold of our children. Casper began shouting, rocking on his seat, fidgeting and then crying hysterically and Ruby adopted the personality of someone at the helm of an unstoppable tickle. The tears and giggles continued throughout the gripping final zone of the game.  The Stingrays had too been on the slush by the looks of things and came back with a great deal more speed and voracity, whacking the ice with such vigour that the puck spent more time in the air than on the ice. Casper ’s tears came to an abrupt halt when the puck, shot like a bullet from over the top of the protective screen and whacked the steel panel directly above his head.  He didn’t cry after that. He probably thought it was the Stingrays way of telling him to shut up.

Towards the end of the game, both teams had 2 points each and the game went into ‘Sudden Death’ which also cheered Casper up tremendously as he thought someone was going to get shot.  The tension was unbearable.  Usually as a family I would say we’re quite reserved and quiet but we were well into the game at this point and became as rowdy and audible as the rest of them.  Ruby enjoyed dancing to the snippets of music that accompanied the game and found it quite hard to sit still during these interludes leading me to question what made up the ingredients of the slush and whether I should have had one.

Unfortunately, the guillotine of sudden death landed on the necks of Hull Stingrays and the cheers for Coventry Blaze were few and far between and as soon as they scored most people left their seats and stormed off home in a huff.  We stayed to watch the teams shake hands and left the arena feeling exhilarated, with big smiles on our faces and launched straight into a discussion about when we’re coming back to   Hull Arena   to watch another game.  So, as a family we would thoroughly recommend supporting your local ice hockey team   Hull Stingrays   – one game and you’ll be hooked.  Remember though to stay away from the slush or pack some restraints and a couple of gags to cope with the after effects.

Matches are held at the Ice Arena regularly see here for dates   www.hullstingrays.co.uk Ticket prices start from £7 for under 16s £10 for OAPs and £15 for everyone else.  Or you can purchase a family ticket for £37 which includes 2 adults and 2 children.  I would also advise you to park away from the arena as they charge £3 for using their car-park and the parking attendant scaremongers you with tales of becoming “locked in” other car parks in the area so unfortunately you feel obliged to pay him.