The blue and golds went down to defeat in dissapointing style at the Leisure Centre last Saturday. A stuttering below par performance saw them have ample chances to win the game against a much improved Horners outfit from last season.

The hosts started brightly as Steve Davidson’s long pass found Lee Facus out wide who sprinted away and did well to score despite the best efforts of at least 2 covering defenders to stop him.Davidson was unable to add the extras as the swirling wind made goalkicking extremely difficult.

The pick of Beverley’s players on the afternoon was man of the match Nathan Wilkinson whose rampaging run midway through the half required a last ditch tackle from the opposing full back to deny him.

Some suspect defence then allowed the visitors the lead with one of their attackers seamingly running almost 50 metres across field to score in the corner without a hand laid on him. the difficult touchline conversion was added.

Beverley ARLC did regain the lead just before the intrerval courtesy of an opportunist try from Gavin Proctor from the dummy half position to send the blue and golds 8-6 to the good at the break.

The initiative was handed to the visitors in the second half almost immediatley as the restart kick off was allowed to bounce into touch. The

Horners loose forward picked the ball out of the scrum to  score through again some ordinary defence. The home side then through everything at their opponents for the rest of the game but were unable to get over the line.

Rob Orsmonde game closest  to scoring when the ball was shipped to the right and Ian Lane’s pass saw Orsmode get over the line with several defenders around him but was unable to get the ball down. That proved to be a crucial moment in the game.

The visitors sealed both league points with 5 minutes to go when Beverley were unable to deal with a high kick which bounced kindly for the attacking side and saw them score beneath the posts. The match boiled over in the second half neccessitating two sinbinnings for th visitors but Beverley did not take advantage.

This Saturday Beverley are at home to Fenners in the Tom Beautiman Cup kicking off 2pm at the Beverley Leisure Centre. 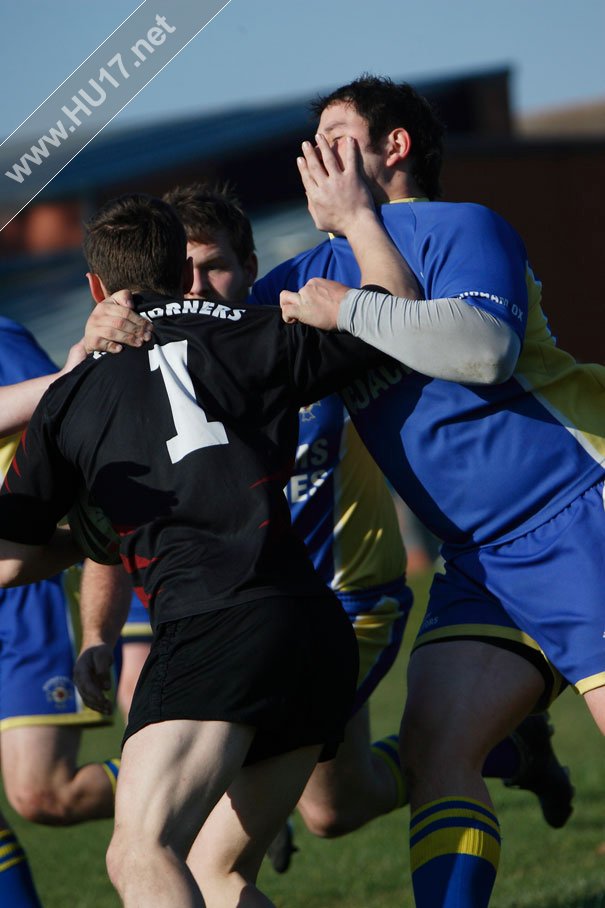