Sutton won the toss and asked Beverley to bat first . Kieran Simpson and Harry Gamble opened the batting and Simpson was bowled in the first over to a good ball from Sam Graham. Greg Whyley joined Gamble and they both batted superbly to move the score along at a good pace, punishing the loose balls, both hitting 5 fours each.

Both Whyley  25 and Gamble 28 retired which brought Tom Norton and Tommy Hudson to the crease,  With a combination of big shots and good running they both batted well to keep the score moving along , Norton was not out 26 and Hudson not out 25 as Beverley`s innings closed on 123-1

Team manager Neil Goforth had a final team talk on the pitch as the U13`s took to the field to defend their total. Bradley Graham and Kieran Simpson bowled the fist  4 overs for only 9 runs which put Sutton under pressure straight away. Sutton opener Reece Martin 12 not out batted well until he retired followed by Will Roe 19, who was bowled by Whyley .

Sam Graham 12, batted well until he was out caught and bowled by Danny Deeming, who then  took another wicket  to finish with 2 -15 from 3 overs. Gamble took 2 wickets from his 3 overs as Sutton fell further behind the run rate, Hudson and Lewis Richardson bowled well without success and Bradley Graham was superb, only conceeding 7 runs in his 3 overs. Sutton never stopped trying as you would expect in a final , Harry Masterman and Bradley Drake both scoring 12 and Harry Fox 8, but  Beverley kept their nerve as Sutton ended their innings on 111 for 6.

The game was played in an excellent spirit, infront of a large crowd,  with many of Beverley`s senior players in attendance, to provide support for the juniors.

The trophy was presented to team captain Simpson and the jubilant team enjoyed the aftermatch celebrations. The U13`s have had an excellent season,under Neil Goforths leadership  only losing once in the league, and  3 of the players have already represented the clubs 4th team in senior cricket.

It is now the turn of the clubs U17`s  , who have also reached their final, and it is hoped that more silverware will be on it`s way to the Norwood Recreation Ground. 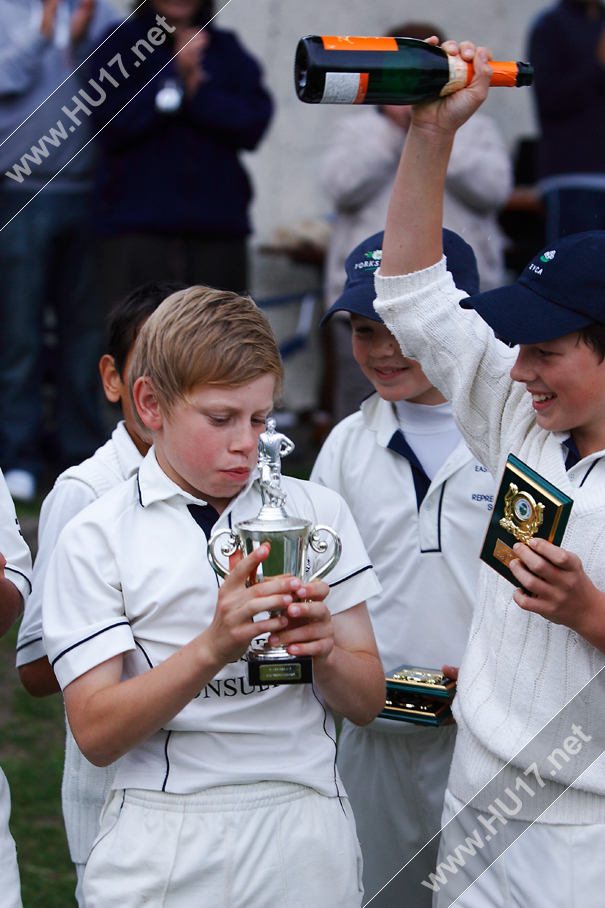