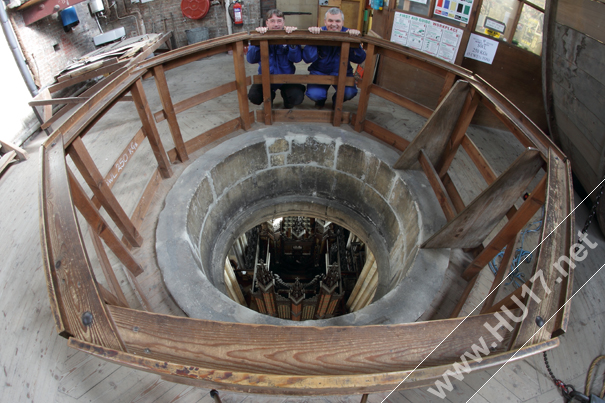 As spring inspires new optimism and re-discovered vigour in the people of England, so it energises the men who keep Beverley Minster in shipshape condition.

Steve Rial is the ecclesiastical plumber/ glazer at the Minster. Or, rather more prosaically, he’s the man who, along with his mate Paul Hawkins, keeps the water out, the heat in and the Minster safe.

For 21 years Steve, 54 and employed by the Minster Old Fund, has been fixing holes in the roof, repairing windows and performing all the tasks needed to maintain one of Britain’s most beautiful churches.

Even now, however, the onset of warm and inviting spring sunshine puts a smile on his face as he contemplates the work in hand to repair damage inflicted by the harsest winter in recent memory.

“We are busy all the time. In winter time it can get dull, but that is the same for everyone, but summertime is great,” Steve told HU17.net.

“You always try to do the inside jobs in the winter. So preferably you want a big window on your bench in winter. But in summer you want to be making hay and out on those roofs and doing the outside work.”

Steve and Paul have already been out on the high roofs of the Minster, which faced the worst battering the icy and snowy weather threw at the building.

So far cracks have been discovered in some of the roofs’ leading, although this is not considered a major problem compared to the bigger issue of re-leading all the high roofs. After all, a few thousand pounds for repairs is much easier to find than a few million to lead the entire roof.

The pair also have to undertake one of the more unpleasant tasks of the spring clean.

Steve continued: “Recently we have been clearing all the gutters and all the sumps. Everything discharges into a hopper head and it runs away from the Minster.

“But they get full of leaves, there are hundreds of pigeons nesting, plastic bags from supermarkets. They wedge themselves in, blocking things up and it ends up spewing water over the side.

“Before you know it everything is going green and it is damaging the stonework.

“We have found splits in the lead and we now have scaffolding on the roof. These roofs are long overdue re-leading, but obviously we haven’t got the money at the moment.

“It will cost millions and millions of pounds to re-lead these high roofs, but before we take any lead off we have to build 110ft high scaffolding from the outside, on to the low roofs.

“They have to go about six foot above the ridges, which are approximately 100 foot up, and then it has to be covered in. Can you imagine how many tens of thousands of pounds in scaffolding alone it would cost?

“Repairing leaks is one of the most pressing jobs – the main thing is if you own a property, now matter what it is you always make sure the top is waterproof before you do anything else.”

Steve likens working on the Minster to the Forth Road Bridge (“you are working on it all the time”) and his workshop, only accessible up a steep, narrow and winding staircase, bears witness to that.

On the desk lies a panel from one of the windows, which Steve is repairing using as many original pieces as possible, while propped up against the wall is another panel broken during the winter.

Then there’s the small job of replacing some crumbling stonework on the top of the north west tower.

“We have had the scaffolders here, building a scaffold right on top of the north west tower, ready for the job of taking a pinnacle down,” continued Steve

“If it was in front of me here we would just take it down and put some new stone in. The stones have split and that was picked up by our architect.

“Every five years we have what is called a quadrennial fabric report and the architect comes here, he goes through everything from top to bottom with a fine toothcomb, and he picked that up.

“That will go on for the next few weeks or so, providing the weather is ok. A mason firm will come and do the job. It is pretty straightforward, it’s only because it is 200 foot up in the air that it causes a problem!”

While much of Steve’s work revolves around fixing problems as they occur, he and Paul have spent the winter installing monitoring equipment to measure movement in the Minster.

It’s a long-term project to record the effects of heavy traffic on the fabric of the building – and identify any problem before it gets out of control, as Steve explained.

“Every high roof has got these monitoring lines in now. This has been a big job for us.

“On the end of each line is what we call a gantry, which is basically an L-shaped piece of metal which is bolted to the wall and have a piece coming off the wall called an Avonguard, which monitors horizontal and vertical movement.

“We want to be able to monitor if there is a significant movement in the building. The majority of the subsidence in the building would have happened in the first 100 or so years of building it. But this is an extra safeguard and a more modern way of keeping an eye on the building.

“There are cracks all over the building, but what you have to remember is that this building has been up for 750 years, so it’s not your run of the mill building is it?

“It is long term monitoring and we have engineers that come from London and they monitor it. So if there was a significant movement, there are a big pile of brains there who would be able to work on this, they would start raising the money and there would be a way to solve it.”

It’s a big and responsible job maintaining the Minster.

And even though Steve will happily complain about this and that – especially some of the climbing – his two decades at the Minster have left a mark on him.

“I do moan a bit about things, but it becomes part of you. Without being a clever-dick, I think you have got to be a special kind of person to work here. You can’t come and work here and have demarcations.

“My mate is classed as a joiner/ handyman, but he can’t really work here and turn around and say: I am not touching that, it’s glass or it’s lead.You can do that, but you are not going to last.

“Ninety-nine per cent of the job is common sense. If you are practical with your hands, jobs a good un.

“The only downside to this job is climbing. Everybody, but everybody, says to me it must make you fit. I have got legs like Sir Chris Hoy, but the top half of me, no, no.

“It’s the walking and the climbing that are the tough parts. I come up here and get working, but this week we have done every roof and every gutter and they are a right trek to get to.

“You don’t get any younger and it gets harder.”