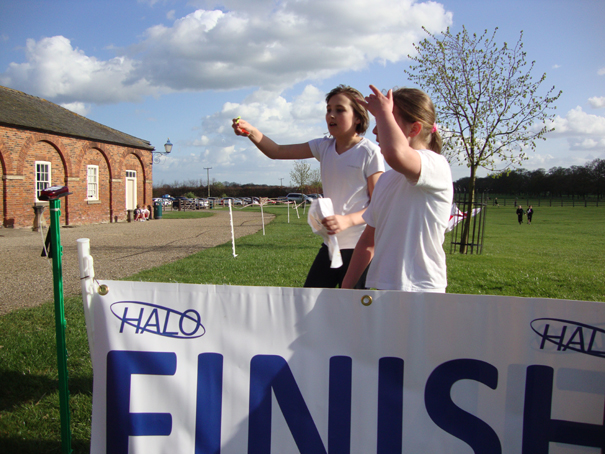 Last week (April 12th) saw nearly 200 pupils from 29 primary schools come together at Burton Constable Hall near Sproatley for the final of this year’s East Riding Schools Orienteering Championships . The event was the culmination of a joint project between the two School Sport Partnerships that cover all the East Riding schools and the local orienteering club HALO (Humberside and Lincolnshire Orienteers).

Over 500 pupils from 45 schools, many of whom had little or no experience of orienteering, took part in the thirteen heats that had been held at various venues throughout the East Riding in the past month. The top pupils from each of the heats were invited to take part in the final and could run either as individuals or as pairs. There were two courses, one for year 6 pupils and the other for year 5 and below

66 teams and individuals took part in the Year 6 competition which was contested over a 1.8km long course consisting of 22 controls which had to be visited in the correct order.  The winning team in this category were Ben Parsons and Elliot Reed from Preston Primary School who sped round the course in 12 minutes 11 seconds.  Next came Alex Morris and Haydn Rigby from Aldborough Primary School in 13 minutes and 51 seconds, followed by Harry Burnhill representing Martongate School in 14 minutes and 27 seconds.

26 teams and individuals took part in the Year 5 competition which consisted of a 1.4 km long course featuring 16 controls.  The fastest year 5 runners were Patrick Cooke and Cameron McGregor from Driffield Junior School with a fantastic time of 10 mins 6 secs for this course.  Not far behind, also from Driffield Junior School, were the trio of James Cullen, Niall Parkinson and Callum McNeil who finished in 11 mins 36 secs and the 3rd fastest on the day were Ben Waterhouse and Oscar Powell from Elloughton.School with a time of 14 mins 13 secs.

The winning schools were Aldborough Primary followed by Molescroft in year 6 and Driffield Junior School followed by Martongate in year 5.

The full results are available on the HALO website www.halo-orienteering.org.uk .  Many congratulations to the medal winners, who also received vouchers entitling them to free entry to any HALO event in the next 12 months, and to all the other competitors, each of whom received a certificate and a goody bag thanks to the generosity of Tesco, Nestle, British Orienteering and the East Riding of Yorkshire Council Sports Development Team.

In addition to the standard courses, a maze course was also on offer to test navigational ability at high speed, Driffield Juniors providing the winners for this course also, Lewis and Jake completing the course in 2 minutes 59 seconds.

Partnership Development Manager for the Bridlington School Sport Partnership, Angel Sanderson commented “It is fantastic to see so many pupils here today having made the step up from their local competitions. To have such large numbers at what is a normally a minority sport just goes to show how the team efforts are proving successful”. Amanda Jack, Competition Manager for the East Riding, reiterated this “Having developed an effective school to club link with HALO we are keen to not only build on the success of this event but ensure opportunities are available to all who are interested”.

After seeing all the talent on show, John Butler, the Chairman of HALO invited anyone who was interested in doing more orienteering to come along to the Beverley Club Night which takes place from 6.30 to 8 pm every Monday during term time at Longcroft School.  Suitable for all ages and abilities – no experience is necessary – qualified coaches are on hand.  Further information can be found at www.halo-orienteering.org.uk  or from the organiser John Butler, telephone no. 01482 870312, email john@halo-orienteering.org.uk