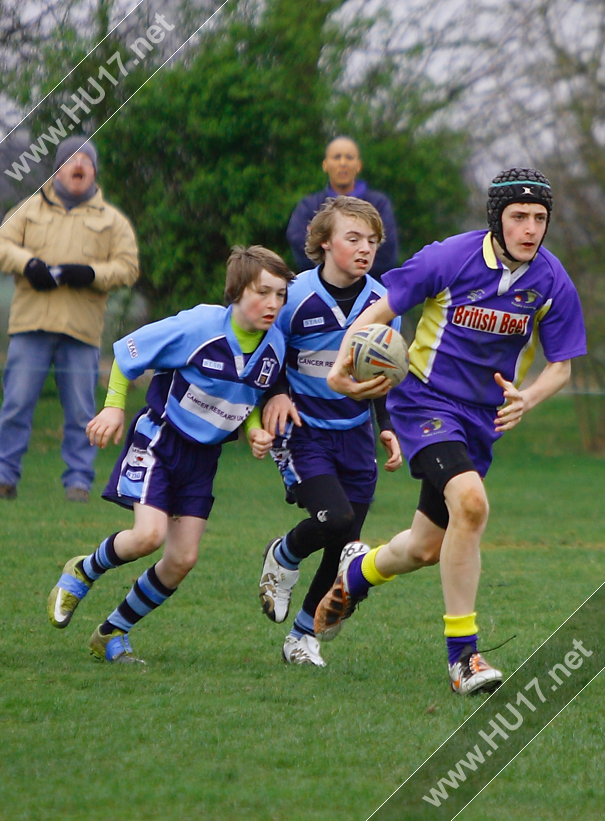 James McGahey set the tone for a fantastic 54-18 victory for Beverley Braves under-13s over an outclassed but battling Hull Wyke side.

But it was a real team performance, with Joe Wardill on hand at the right time to help himself to a quartet of tries and everyone on the pitch playing at the top of their form.

The match started with a minute’s silence for Councillor Brenda Petch, who was a big supporter of junior rugby in Beverley.

One the game started, three outstanding tackles from Harry Gray let Wyke know exactly what they were up against.

Such a great defensive start forced a knock-on from the away side and a lovely passing move saw Harvey Lazenby really unlucky not to put points on the board.

With confidence high, Beverley threw the ball around well and Jay Black, with his usual outstanding passing, released Wardill to break through the Wyke defence and open the scoring.

Dan Norman took a high ball well from the resulting kick off, with Harry Bulleyment again showing his skills both in attack and defence.
An incisive run from Wardill was rewarded when McGahey put him through to extend the Braves’ lead.

Play continued at a fast pace with Conor Egan coming in off his line several times to make some excellent tackles.

McGahey made a crunching tackle which was so strong it forced the ball clean out of Wyke’s hands and from the fumble Owen Harrison made valuable yards with an impressive run.

Dylan Clifford then took on the running, twisting and turning powerfully through the tackles to storm over the line and score. Wyke may have been 18 points down, but they refused to give up and made numerous attacks and were rewarded with a try.

Beverley replied in the best way possible by throwing the ball around to release a speedy Gray out wide.The try was converted with an outstanding kick from the side line by Harrison to make the score 24 – 6 at half time.

Wyke continued to battle hard and their immense effort paid off as a gap was found in Beverley’s defensive line up and they crossed the tryline again.

Beverley responded with another try from Wardill as a result of a good run from Will Dodds, which was converted with another acurate kick from Harrison.

The Wyke winger outpaced the Beverley defence as the visiting side’s battling spirit shone through, but another solid reply came from the Braves as Clifford pounded his way through to score his second try.

Their was no answer this time from Wyke and Beverley moved up a  gear. Tony Usher ran hard and released McGahey, who made a pass to a hard, fast run from Jamie Branton which saw him power over.

Wardill then added his fourth try to increase Beverley’s lead. Callam Bielby, despite picking up an injury in the first half, returned to the field and broke though a number of tackles to set up Gray to power over again from a timely pass from Wardill.

Wardill made another accurate pass later to release Harrison, who left the opposition standing with his fast run as the game finished 54 – 18 to the home side.

Man of the match for an absolutely outstanding performance went to McGahey, while top tackler was Kurt Pelham who had an immense game yet again.