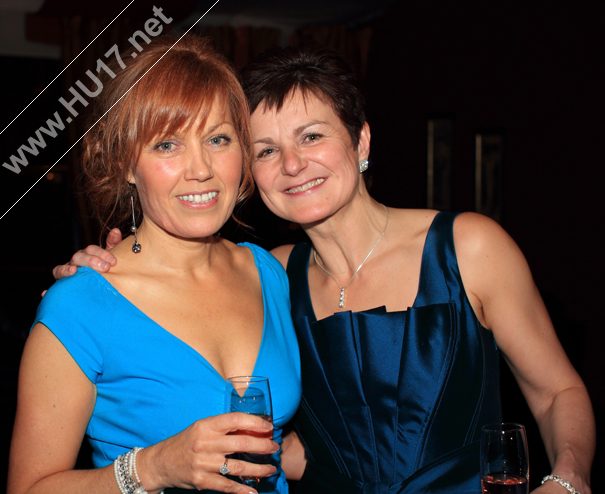 Members of Beverley Athletic Club gathered at Lazaat Hotel in Cottingham recently to celebrate their achievements in 2010.

Prizes were presented by Jonathan Leafe of Strawberry Printers who have a long association with Beverley AC as associate sponsor of the club’s races.

Trophies were awarded to runners in recognition of success, improvement, dedication and commitment.

Matt Chadwick, James Pearson, Andy Johnson and Neil Bant all rushed home from the English National Cross-Country Championships at Alton Towers to clean off the mud and get ready for the presentation evening.  The quartet picked up a significant number of trophies.

James Pearson has gone from strength to strength since joining Beverley AC and after a very successful year in which he completed his first marathon he claimed trophies for the fastest Beverley runner at 10k, 10 miles and in a marathon.  He was also awarded the coveted Runner of the Year trophy for the second year in succession.  This award recognised the significant number of races that Pearson ran in 2010 and his consistency in being near the front of the field.  He also competed in all the races in the East Yorkshire Cross-Country League as well as the county, inter-county and national cross-country championships.

The trophy for the most promising male newcomer was awarded to Matt Chadwick who joined the club in September last year.  A native of Leeds, Chadwick won many team cross-country medals with Leeds City AC.  He made his debut in the East Yorkshire Cross-Country League in October last year and has been the first Beverley runner to finish in all league races so far.  He has always finished in the first seven overall.

Andy Johnson was voted most promising newcomer in 2009 and this year he was awarded the trophy for most improved male runner.  He achieved a string of personal bests during the year in races all over Yorkshire and some further afield.  Runner-up in this category was Neil Bant who has shown significant improvement during the year.  Bant was also runner-up for the marathon performance of the year.  With his achievements overshadowed by even greater performances his success was recognised by the award of the Wooden Spoon.

Last year Julie Donald won all four distance trophies as the fastest lady over 10k, 10 miles, half and full marathon.  After another excellent year which saw her compete at cross-country for the first time, Donald retained all but one trophy. Although she completed the Dublin Marathon in 3.30 Donald could not match the achievement of Lucy Stamford who finished her first ever marathon at Lochaber in Scotland in 3 hours 29 minutes.  Stamford’s achievement was also recognised with the award of the trophy for best female performance in a marathon.

trophy for the most promising female newcomer was awarded to Rachel Kirk who has achieved some notable times since joining the club last year.  She has the potential to challenge both Julie Donald and Lucy Stamford.

Jo Dewar was voted the most improved female runner against strong competition from Amanda Ritchie and Lucy Stamford.

Although Rob Snaith does not race as much as some of his clubmates he chooses his races carefully and achieved major success in 2010.  He won the Mablethorpe marathon and the Ryedale 10 and recorded the fastest time for a Beverley runner in a half-marathon.  His achievements were rewarded with the marathon performance of the year trophy and the half-marathon trophy.

Trophies for performance of the year were awarded to Amanda Ritchie and Aubrey Morell.  Ritchie recorded a huge improvement on her previous year’s best half-marathon time finishing an incredible 10 minutes inside her handicap at Bridlington. Morrell beat his personal best at the Beverley 10k by almost two minutes and achieved an age grade mark of 82%.

Pete Watkinson received the club member of the year trophy for his dedication to representing the club and for his help behind the scenes at the Beverley and Walkington 10ks.

A host of handicap prizes were presented and Pam Atkins and Frank Harrison were jointly awarded the Knock-out Cup.

A new trophy, the Lakeland 50, was awarded to Darren Rodmell who completed the Coniston 14+, the Windermere Marathon and the Derwentwater 10 to notch up over fifty miles running up and down the hilly roads of the Lake District.

The final presentation of the evening was a special award to Andy Tate who stepped down as club chairman during 2010 after eleven years in charge.  New chairman, Rob Reid, thanked Andy for his valuable contribution to the running of the club, acknowledging his commitment and dedication.

With no race the day after the presentation evening members of Beverley AC were able to let their hair down on the dance floor with music provided by live band Reloaded and DJ Tony Dunn and his video disco.