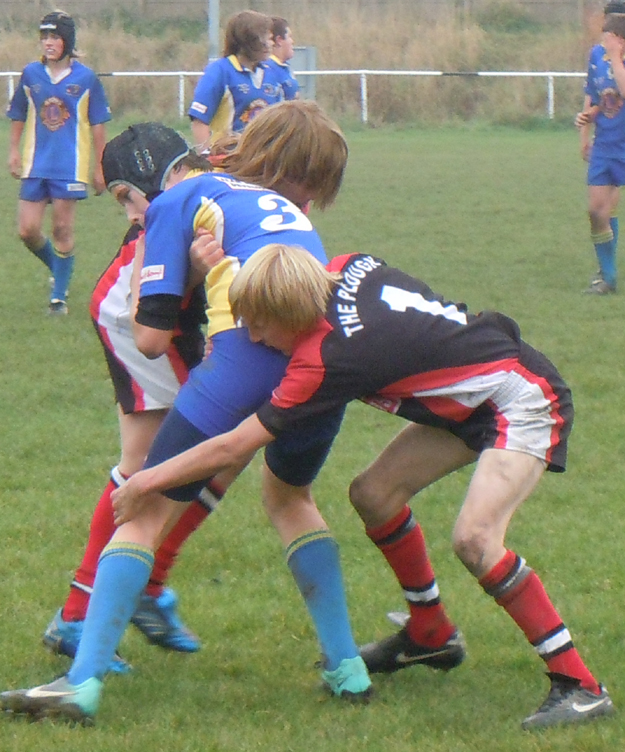 It was an early start for the Braves this Halloween morning and both sides look nervous for the first few minutes of play. Zak Mayo took the ball cleanly from the off but the game was scrappy for a while and Normanton capitalised on a couple of offside’s from Beverley which gave them valuable yards up the field.

This pressure was felt even more when James McGahey was taken off with an eye injury, his presence sadly missed through the match. Normanton where the first to settle their nerves and got the break, to score in the corner. Tom Wood made an excellent tackle to stop Normanton touching down but from the resulting play of the ball they went over under the sticks and converted 10 – 0.

It was important that the Braves hit back straight away and Harry Gray did just that with a bone crunching strike making Normanton knock on. Braves then picked up the pace and passed down the line with precision for Kurt Pelham to go over in the corner. Superb team try.

Normanton kicked off, slightly shaken but Conor Egan took the ball well under pressure from the Normanton onslaught. Bailey Foulston’s powerful runs down the middle of the pitch were unstoppable at times and in turn he battered the Normanton lads. Gray then broke down the wing to cross the half way line. Owen Harrison threw an excellent dummy to storm down the middle of the park. Jay Black played a quick ball to release Pelham who again forced his way over the line. Excellent try.  Now the Braves were passing with such enthusiasm and won a scrum against the shell shocked Normanton side that it was such a shame the whistle blew for half time 10 – 8.

Callam Bielby started the second half with a tough tackle against the Knights biggest lad and the pressure was kept on but a couple of decisions against the Braves gave Normanton the yards they needed to push the Beverley line and score against the run of play. This was enough to put their confidence back up again despite hard running from Callum Officer and man of the match Dylan Clifford down the middle and some perfectly timed tackles from Gray.

The Knights scored again but Beverley did not throw the towel in and Mayo’s kicking worked so well for the Braves. Gray broke free down the wing, Jamie Branton kicked across the field to split the Knight’s defence and pile on the pressure. Dan Norman also had a good run down the wing and Tony Usher and Tom Tozer battled hard, but sadly the game ended with a break free try for Normanton to end the day 26 – 8 to the home side.

In the words of the home coach this flattered Normanton and the lads should be very proud of their performance against a tough Castleford side.