Beverley’s brand new music facility was the venue for a Piano Masterclass with the Artistic Director of the Beverley Chamber Music Festival, Martin Roscoe.

As part of the Cropper Welsh Roscoe Trio, Martin had opened the Festival the previous evening at St Mary’s Church with a concert of Haydn, Mozart and Tchaikovsky, and was playing again in the evening with the Coull String Quartet, but managed to hold a fascinating Masterclass in between, offering three very talented young local pianists the benefit of his advice and experience.

The young pianists had taken part in the Chamber Music Challenge in June, which offers opportunites for young instrumentalists to rehearse together and perform in an Audition Concert, and many of those that take part are then offered the chance to take part in the Beverley Chamber Music Masterclasses.

There were three other masterclasses in this year’s Festival.  The violin masterclass was on Saturday at 10am with David Greed, and at 2.30 in the afternoon Claire Bradshaw held a vocal masterclass, a first for Beverley Chamber Music Festival.  Young woodwind players had the opportunity to attend a masterclass with members of the Haffner Ensemble at 2pm on Saturday.  Entry to all masterclasses was free, and they were all held at The Hexagon Centre.

The Hexagon Centre is the fabulous new home of the Schools Music Service, situated on Coltman Avenue in Beverley, which used to be part of Swinemoor Primary School.  The maze of rooms, all stunningly renovated, now offer areas of various sizes in which students can practise instruments either on their own or in groups.  The percussion suite alone has been kitted out with £30,000-worth of instruments, all donated by the Friends of East Riding Youth Orchestras.

The rooms have acoustic ceilings and heavy doors to cut down the sound spilling into other areas, but thankfully not so much so that the corridors are still alive with the music coming from the young musicians using the facility.

There are several pianos around the centre, many of which have been completely renovated by the School’s Music Service piano technician, including the grand piano in the stunning hexagon room.  Today’s masterclass was the first time it had been played ‘in anger’ and it sounded magnificent.

Robert Mitchell, Head of the School’s Music Service, welcomed everyone to the piano masterclass, and expressed his great happiness at being able to hold such an event within the Music Service’s own premises.  “It is events like this which persuaded the local Council to help us with the three-quarters of a million pounds needed to refurbish this building.  We now have a wonderful facility for the use of the community, particulary the children.  I see this as proof of how well regarded the School’s Music Service is in the area.” 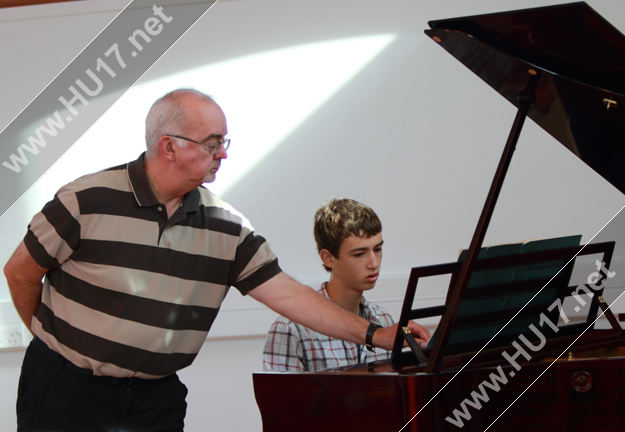