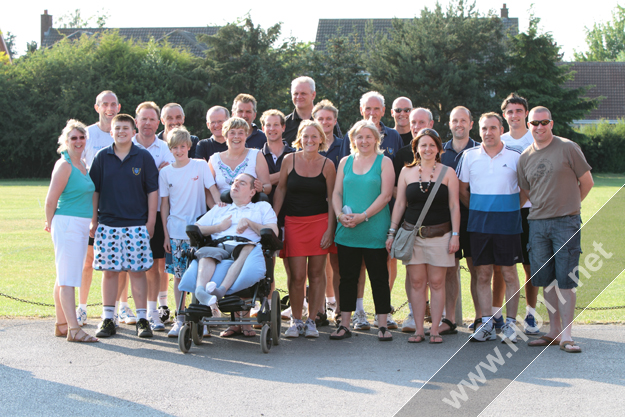 The fourth Charity Shield Day event passed without injury or incident in very hot and sticky conditions. This is the first year that Racketball has been played instead of squash by 24 players contesting for the Shield in 8 teams of 3. The gallery full of players and supporters, the courts ringing to the sound of string on ball and ball to wall. Loyal supporters leaning over the gallery rail straining to see every inch of the court over the shoulders of others calling out encouragement.

Andie Merrikin  again provided a table full of nibbles for player sustenance through the afternoon. With each game being won by the player with the most points after fifteen minutes non-stop effort; speed, skill and stamina favoured the winner. The team with the most points in their group of four, played off in the final and the runners up in each group played off for third and fourth place.

As the last match of the final started only 6 points separated the two teams.

Presentations and thanks in the evening sunshine outside the club house preceded hot dogs and refreshments from the bar with family and friends and a little world cup football.

Thanks go to all those who took part either playing, marking, supporting or organising.

All helped to make this another successful competition.