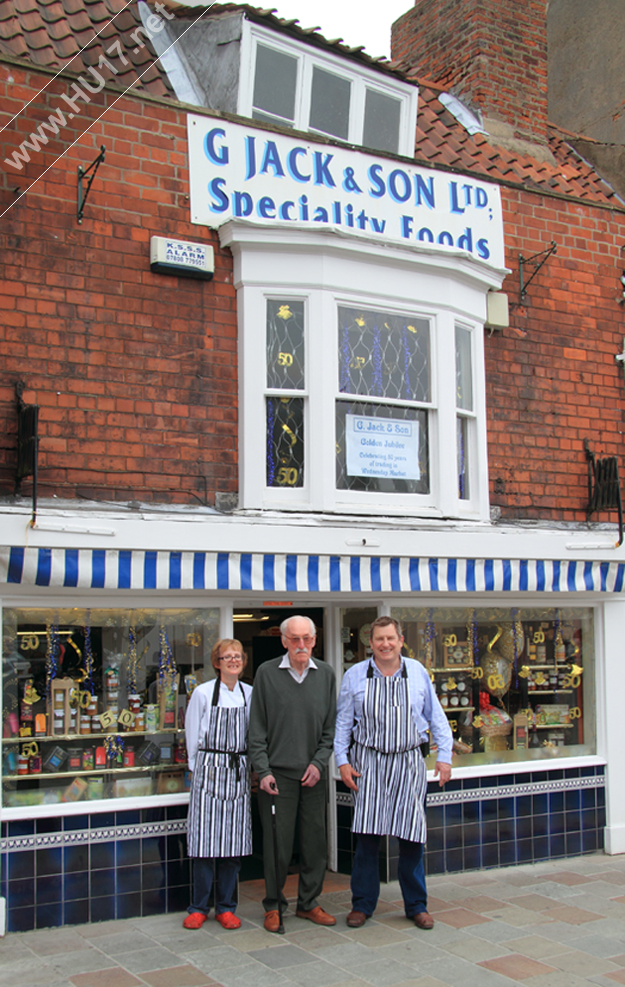 Home delivery may no longer be the name of the game, but a real interest in customers’ lives is still at the core of Beverley delicatessen G and A Jack.

The popular Wednesday Market shop, run by Duncan Jack and his wife Joy, is this month celebrating its 50th anniversary as one of the town’s most popular and best loved businesses.

Like most aspects of Beverley life, G and A Jack has transformed beyond recognition over the years, adapting as the supermarkets have encroached upon the businesses of smaller traders.

But there’s still something reassuringly intimate about Duncan and Joy’s shop, which stems from an understanding of their customers and a desire to be at the heart of their community.

Duncan, 57, told HU17.net: “This is still a shop for working people, and we get a lot of the same people coming in on a daily basis. We think we have something for everyone.

“We have a lot of very loyal customers, and it’s amazing how well you get to know them just for chatting with them for a couple of minutes a day.

“No two days are the same. Every day we are meeting new people as well as older customers and we are still very happy here.”

Although G and A Jack itself has reached its half century, the family’s businesses in Beverley go back more than 125 years, making them one of the oldest surviving businesses in the town.

Founded by Duncan’s great grandfather Richard Care, the family ran two groceries in the town, one on Saturday Market and the other on Eastgate – near the Beverley Minster –  the latter eventually being run by Duncan’s grandfather George.

In a time when every street had its own corner shop, Richard Care’s main Saturday Market store was also a wholesaler to the many smaller traders in the town, who themselves were at the heart of their own communities.

With the Saturday Market shop eventually closing down and the Eastgate Market sold to Armstrongs, George Jack moved his business to Wednesday Market and changed the name to George Jack and Son.

Aged 70 at the time, George relied on his son David and the family set about retaining the core values of the other shops, delivering to customers and catering to their every need at a time when quality service was at the heart of a successful business.

It was in 1985 that Duncan came on board, after having “a variety of different jobs”. And it was about this time that the time of the small, independent grocer began to come to an end. It was change or die time for G and A Jack.

“The small supermarkets started to open, and we really started so see big changes,” continued Duncan. “Frank Dee’s opened, and these self-service stores started to sell all of the things that we did.

Click Here
10 Effective Tips to Save Money in Grad School

“When my father retired, I decided to change. I didn’t really take to health food and the supermarkets had started selling things like home brew kits, so we decided to go for speciality foods.

“Now we source locally when we can. We now sell good quality cooked meats from Yorkshire, cheeses and chutneys, good, fresh sandwiches and home baked cakes and food.

“Morrisons opening on the edge of town really changed things noticably again. It hit the town but people soon got used to shopping in Morrisons. Now the supermarkets have saturated the food market and have now encroached on every business’ market.

“It’s just a fact of life and you have to adapt or go out of business.”

And adapt G and A Jack have. With their own bakehouse on Flemingate and employing 12 staff, Duncan and Joy now provide outside catering services and business lunches and are developing the online side of their business. As Duncan says, as one door closes another one opens and “if you don’t look to go forward, you finish”.

But while so many things have changed – some for better, some for worse – Duncan, a former mayor of Beverley like his great grandfather Richard Care, still believes Beverley has retained the essential traits that made it his beloved home town.

“Beverley is still small enough to have its own character,” said Duncan. “We are lucky to be close to the coast and we are still a quiet backwater with a great quality of life.

“It’s the sort of place where people still moan if they can’t get through a set of traffic lights at the first go!