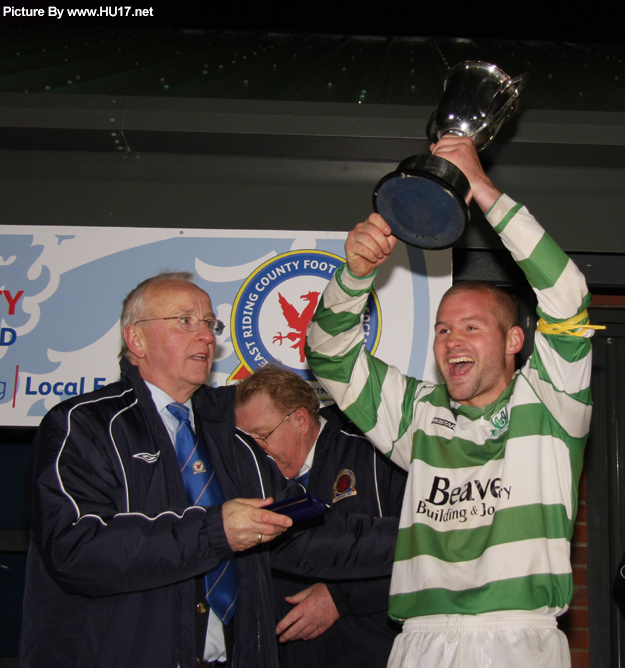 United took the lead when Luke Thompson latched onto a through ball finishing with love drive to the keepers left. Beverley United looked comfortable till Kinloss were awarded a penalty kick.

United keeper Adam Nicholson kept the penalty out however Kinloss did get level after Nicholson was beaten from close range.

In the second half Beverley Untied were awarded a penalty that Shaun Gibson slotted away not once but twice after being forced to retake it due to encroachment. Beverley broke as Kinloss searched for an equaliser resulting in a goal for United making the score 3 – 1.

Kinloss did manage to pull a goal back though Beverley United dug deep and held out for to claim the cup.

The absence of club manager Danny Williams, the manger who seems set to exit the club was in constant contact with coaching staff on the touch line. After the game Danny Williams said;

“A great way to go out, This trophy is contested by the best Sunday league teams throughout East Yorkshire – York Scarborough, Goole and Hull and we showed them what a team we have here in Beverley.”

“We have done this on our own, a set of mates who have come so far. To say I am proud of them would be an understatement and I’m glad I have plaid a small part in giving them something they can look back for years to come.”

“Now it is time for me to have a break, United are still hoping that we may restructure, rebuild and appoint a new manager so the team can continue.”

Tomorrow – video from the game and post match PLUS game pictures.