As Beverley begins to thaw out it has become clear many residents of the town are unhappy with how the recent cold weather has made venturing outside their homes a difficult with the risk of slipping over on the ice cover paths and roads.

In a recent article from Beverley resident Gemma Lucas ‘Let it Snow‘ she highlighted the problems she faced as a young person going about her daily business in Beverley which resulted in her suffering bruises from falls on the frozen pavements.

Beverley Town Council are not responsible for gritting the pavements and roads around Beverley, this is the responsibility of East Riding of Yorkshire Council and the Highways Department and as such any issues or concerns over the conditions of roads and pavements you can contact them directly on 01482 393939.

‘The council provides a range of services to help deal with winter conditions. These range from the precautionary salting of the more heavily trafficked roads to snow clearance, the provision of boxes of salt in built-up areas and salt heaps on rural roads. Footpaths in certain urban locations will be salted at times of extreme weather conditions.’

East Riding of Yorkshire Council also have a map that shows the roads and paths that are treated you can download the map here. Also explained is the priority given to clearing roads and paths in the event of adverse weather; 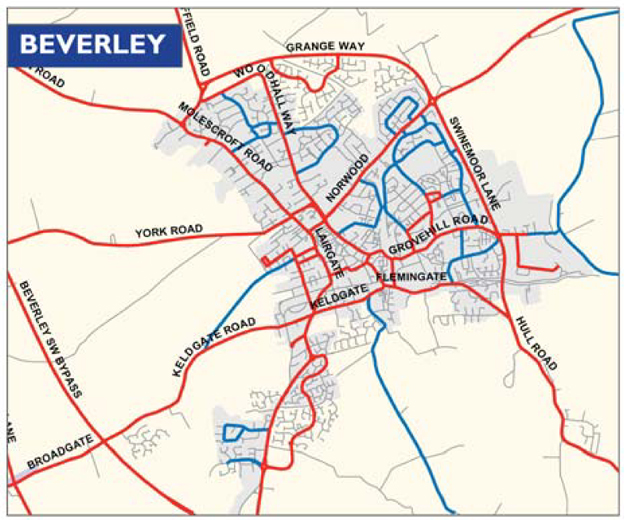 In the event of a major snowfall the council will concentrate its efforts on keeping the ‘defined network’ open. Snow clearing will be tackled in order of priority as follows:

1. Major roads between cities and large towns on the ‘defined network’.
2. Distributor roads leading to the ‘defined network’ from the smaller towns and villages.
3. All remaining routes and attending to emergencies on unclassified roads.
4. Footways will only be cleared in main shopping areas and busy urban areas when resources become available and the roads are open and safe.